Theater was founded in 1968 as yale/theatre, “a gathering of responses to real events” in that tumultuous year. In the magazine’s first issue, Ren Frutkin declared that it would consist of “theatre, thought, discussion, dream, art, people.” Since its first issue (“Do We Need Greek Drama?”), Yale’s magazine has fulfilled Frutkin’s call. 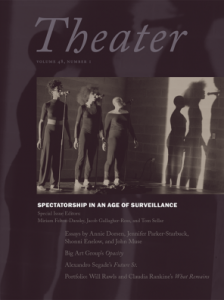 In 1998, the magazine formed a partnership with Duke University Press, publisher of many outstanding journals firmly committed to a general readership beyond academia. Under the agreement, Duke Press handles Theater’s production, marketing, fulfillment, and distribution, while all editorial work continues to originate from Yale. Since launching this partnership, the magazine has won awards for its redesign and has continuously expanded its distribution to include electronic forms.