Professor in the Practice of Directing 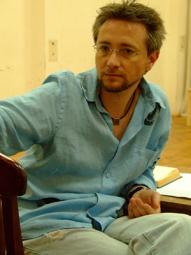 Yuri (Yura) Kordonsky holds M.F.A. degrees in both Acting and Directing from St. Petersburg State Academy of Theatre Arts, Russia, where he studied under the direction of Lev Dodin. He has taught, performed, and directed internationally since 1989. In the period of 1989-2001, he was a resident actor and director at the renowned Maly Drama Theatre-Theatre of Europe in St. Petersburg.

As a performer and director, Yura has toured in more than twenty countries and taught acting and directing in Russia, Germany, Spain, Italy, and Romania. Since moving to the US in 2001 with his family, he has taught at Wesleyan University–where he served as Professor and Chair of Theater Department–as well as at Columbia University, UC San Diego, George Washington University, and the Eugene O’Neill Theater Center.