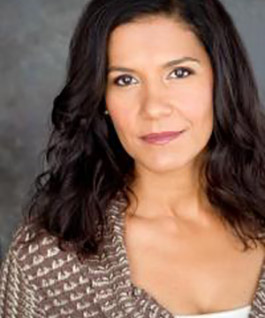 Cynthia is a bilingual actor and dialect coach with more than 20 years of professional experience.

Certified as an Associate Teacher of Fitzmaurice Voicework and as a teacher of Knight-Thompson Speechwork, Cynthia has served as the dialect coach for the world-premiere of El Huracán at Yale Repertory Theatre. She has also coached productions at Yale Rep, Denver Center, NY Classical, Round House Theatre, Children’s Theatre of Minneapolis, Phoenix Theatre, Long Beach Shakespeare Company, and REDCAT. She also served as on-set dialect coach for the Netflix series; Orange is the New Black. She also specializes in coaching accents of Spanish in both Spanish and English.

Cynthia is on the steering committee of the Latinx Theatre Commons and a member the Voice and Speech Trainers Association, where she served as director of Equity, Diversity, and Inclusion.

She is a member of Actors’ Equity Association and the Screen Actors Guild: some of her theatre credits include productions at Elm Shakespeare, South Coast Repertory, Long Beach Shakespeare, Knightsbridge Theater, Will Geer Theatricum Botanicum, and Groupo de Teatro Sinergia/Nosotros. Her film and television work encompasses featured roles in projects such as The Mambo Kings, Tomas’ Calavera, Kiss and Kill, CSI: Crime Scene Investigation, All My Children, Days of Our Lives, and General Hospital.

She is also a playwright. Her play, Miss Quince, was produced in conjunction with the John Lion New Play Festival in Los Angeles, and received staged readings at Cara Mia Theater in Dallas and Urban Theater Company in Chicago.